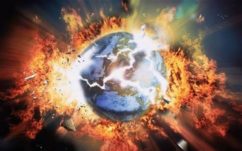 How much of what you experience of the world and believe about it is really based on the truth of “the world,” and how much is actually conditioned into you by the virtual world created by media and social media? This is an important question, because many of us today are actually experiencing less and less of the real world. And it is our connection with the present moment and this real world and real people that nourishes the human spirit most profoundly.

I have made the point about the importance of presence many times, but there is another crucial aspect of our increasing attention on cyber space that I have mentioned less: the worldview the media presents is a severe distortion of the actual world, often passing off the world’s more fearful and violent aspects as “normal.” Much of the media and social media is also deeply, deeply pessimistic.

This includes not just news media. Even well-intentioned news and media sources which seek to advance human knowledge or awareness are often unconsciously distorting our perception of humanity. Human rights groups depend on their very existence in making sure human oppression is continually brought to our attention. Liberal publications tend to be obsessed with oppression and social injustice, including racism, sexism and bigotry.

There has not been a lynching in the US for fifty years, but this didn’t stop a recent suicide of a black man by hanging in a public park in the US going viral, communicated by many as a lynching. This is despite the fact that about 8000 black people commit suicide per year in the US, making suicide the more mathematically likely explanation for his death by about 400 000 to one. His girlfriend later tweeted her outrage at his final act being used as a kind of political stunt. She had his suicide note at hand.

Third wave feminism has also become deeply pessimistic, producing a constant stream of hyperbolic narratives about “rape culture,” “slut shaming” and victim-hood. Is this really an accurate representation of western culture in 2016?

Another relevant story last year involved students at Yale University publicly shaming and swearing at a professor because he had failed to accept their demand for him to provide a safe space for them at Halloween. These mostly female and minority students felt that getting dressed up as “other” cultures (such as indigenous, Chinese, black) was a form of cultural appropriation, and thus traumatic for them. They then tried to have the professor and his wife fired and removed from campus. How oppressed can someone studying at Yale possibly be?

Despite the great progress the “liberation” discourses have helped make, are they now increasingly enslaving us in an unrealistic and pessimistic worldview?

I have not only become a skeptic of the doomsday media and its constant focus on oppression and what is missing. I have also chosen to act, and now watch it very selectively.

And I choose to take the time to listen to people and sources which include an optimistic, positive quality. Is technology robbing us of our souls and rendering us redundant, as many believe? Futurist Keven Kelly doesn’t think so. In his book The Inevitable he writes that robots and automation are giving us ever-more free time to explore what makes us authentically human, and this wonderful development will only become more pronounced. He could be right! Do smart phones actually render us more stupid by making us constantly distracted? Benedict Carey in the book How We Learn refers to scientific evidence which shows that spaced learning with regular breaks is actually the way the brain works best. Intermittent distraction may actually aid learning and memory! Mobile devices could be deliberately used to this end in education. Indeed, one university professor in Queensland, Australia breaks his lectures into ten minute blocks, with spaces for students to fiddle with their machines.

The truth is that most of us have never had it better, all things considered. Yet many of us still act like – or believe – the sky is falling. And media distortion is to blame for much of the error in our thinking. If you want to see the difference between worldly reality and media reality, just open the home page of your city online newspaper on your mobile device, then step out of your front door and into the steet and compare what you see and experience to that home page. Where are all the rapes, murders and terrorist attacks? Unless you live in Mogadishu, they probably do not inform part of your daily experience.

So why do we insist that the media and social media are more real than what we experience? Why do we (want to) believe that the world is a worse place now than what it was when our grandparents were in their prime? Is the world really so terrible, so unsafe? Is it really falling apart because of the threat of terrorism, Donald Trump’s politically incorrect rhetoric or the war in Syria? 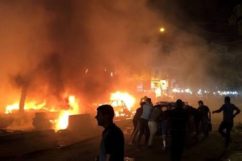 The answer is no. We have been brainwashed into thinking everything is turning to shit, that we are oppressed, that there are evil others controlling the world and preventing us from shining our light.

Sure, there are many problems. Some people have it rough. Real rough. But in the bigger picture we have never had more freedom, more access to knowledge and more opportunity. And we are mostly pretty safe, living long lives and dying in old age. It’s hard to believe, I know.

A few weeks ago I walked through an old estate here in Melbourne, Australia, not far from where I live. At one time the estate was effectively a small village, centered on fruit farming. I wandered along a forested area which led into a small cemetery containing a few hundred graves, most from the first half of the nineteenth century. I was shocked to see how many of the dead were infants. Scores were children under five, many just a few days old. Many bore the same surname, and one family had lost five children, all under the age of six. Many of the graves bore nought but a tiny plaque with a name and age, the only remnant of brief lives snuffed out the best part of two centuries ago, forgotten by all, their mourning parents long dead. In those days there were no antibiotics, no penicillin and doctors did not even wash their hands because microorganisms had yet to be identified. Many women died horrible, protracted, painful deaths giving birth.

I leave you with an extract and a link to a recent article by Steven Pinker, who puts much of the pessimism of the modern age into perspective. He does this by taking an evidence-based examination of many popular misconceptions about the way the world is developing. I quote a section here. I highly recommend that you read the article, and reflect upon it.

“The world is not falling apart. The kinds of violence to which most people are vulnerable—homicide, rape, battering, child abuse—have been in steady decline in most of the world. Autocracy is giving way to democracy. Wars between states—by far the most destructive of all conflicts—are all but obsolete. The increase in the number and deadliness of civil wars since 2010 is circumscribed, puny in comparison with the decline that preceded it, and unlikely to escalate.

Why is the world always “more dangerous than it has ever been”—even as a greater and greater majority of humanity lives in peace and dies of old age?

Too much of our impression of the world comes from a misleading formula of journalistic narration. Reporters give lavish coverage to gun bursts, explosions, and viral videos, oblivious to how representative they are and apparently innocent of the fact that many were contrived as journalist bait. Then come sound bites from “experts” with vested interests in maximizing the impression of mayhem: generals, politicians, security officials, moral activists. The talking heads on cable news filibuster about the event, desperately hoping to avoid dead air. Newspaper columnists instruct their readers on what emotions to feel.”

Marcus T Anthony, PhD is the author of ten books about human awakening, including Discover Your Soul Template. He is also a life coach and teacher of profound intuition. His web site is www.mind-futures.com

5 thoughts on “Why the World is Not Ending Anytime Soon”